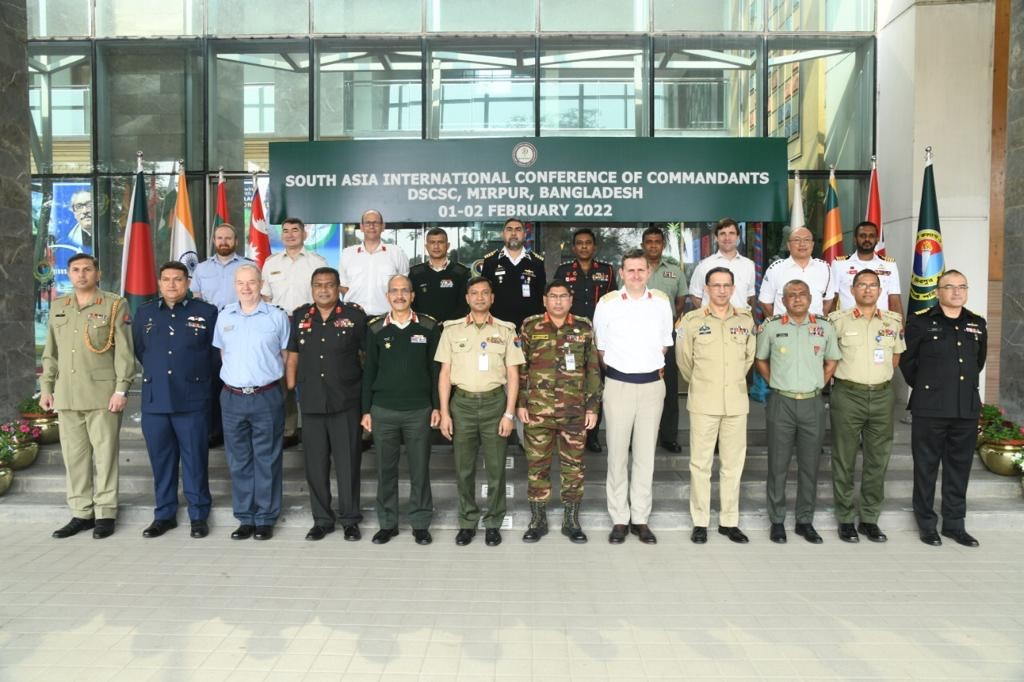 In a ‘blueprint’ exercise aimed at laying the foundations for future defence engagement between PDSE allies, Major General Andrew Roe, Chief Executive and Commandant of the Defence Academy of the United Kingdom, met his counterparts in Dhaka on 1 and 2 February, for the inaugural South Asia International Conference of Commandants.

The two-day event, which was hosted by the Defence Services Command and Staff College (DSCSC) with support from the UK Defence Academy, enabled the Commandants to exchange views on contemporary aspects of PDSE. Participating countries included Bangladesh, India, Nepal, Pakistan and Sri Lanka, with representatives from the Maldives observing the discussions and around 30 starred officers in attendance.

In his introduction to the conference, Major General Jubayer Salehin, Commandant DSCSC, spoke of the importance of critical thinking in joint PDSE as “the most powerful tool to navigate the future”:

Major General Roe then set the scene for the conference, providing an insightful brief to strategic trends, with a particular focus on the South Asia region. He also spoke about delivering PDSE in the 21st century, encouraging the Commandants to consider how to modernise and advance “from transmission to transformation, and acquisition of knowledge to participation.”

Each of the participating countries led sessions ranging from leadership and critical thinking to information operations, human dimensions and blended learning.

And specialists from the UK Defence Academy attended remotely, to deliver virtual presentations on cyber education development and the role of research as a problem solver for defence.

Reflecting on his time in Bangladesh, Major General Andrew Roe, Chief Executive and Commandant of the Defence Academy of the United Kingdom, said:

“I was delighted to participate in the South Asia International Conference of Commandants, which was a fascinating and insightful platform for exploring professional defence and security education in the context of the Information Age. Fostering cooperation between international allies is a core objective of the Defence Academy, and our defence engagement capability represents a significant contribution to wider UK defence. This event was a valuable opportunity to meet colleagues from South Asia and better understand each other’s challenges, while sharing experiential learning and strengthening our international friendships. I am very grateful to Major General Salehin for his hospitality and look forward to supporting similar conferences in future.”