Officer cadets making their mark as women in science

To celebrate the UN International Day of Women and Girls in Science on 11 February, we spoke to two Officer Cadets from Thunderer Squadron, one of four Defence Technical Undergraduate Scheme (DTUS) squadrons operated by the Defence Academy. 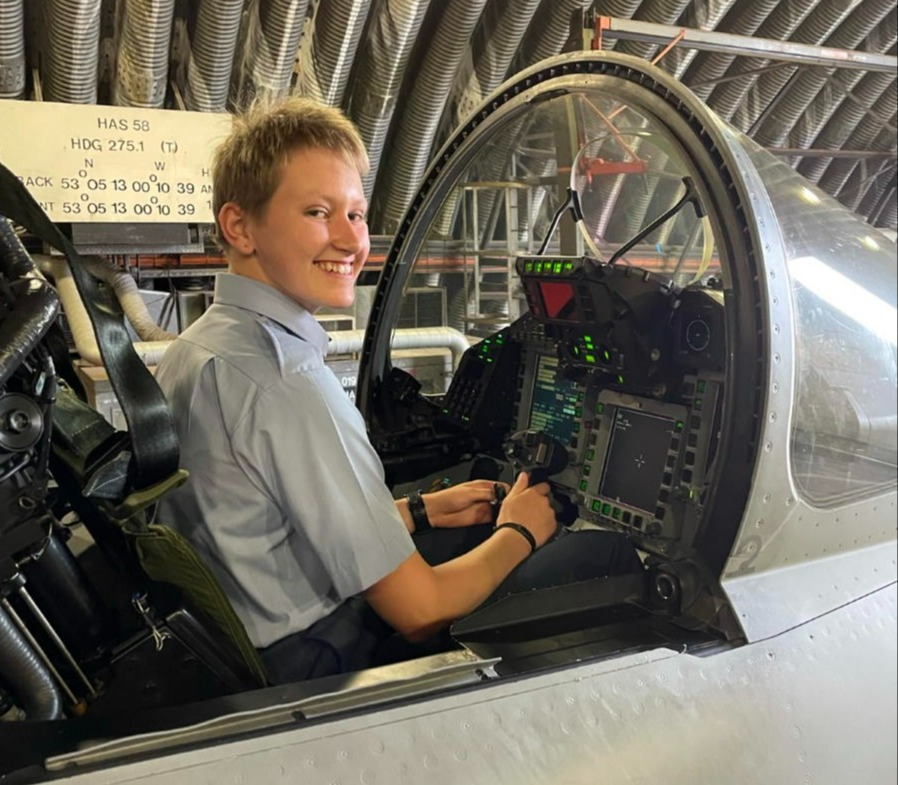 The Officer Cadets, Emily Wymer and Imogen Thompson, told us about the importance of science in their lives, how it is shaping their university degree projects, and their thoughts as they prepare for careers in the Armed Forces.

Officer Cadet Emily Wymer grew up and went to school in North Wales and attended Welbeck Defence Sixth Form College, where she took A-Levels in Physics, Maths, Further Maths and AS Chemistry.

While at school, Emily joined the RAF Air Cadets, where her early knowledge of science was rewarded with a place on a competitive STEM (Science, Technology, Engineering, Mathematics) course.

“This gave me confidence in my abilities. Then I applied for Welbeck, with a good sixth form, with funding for university… and that was my career sorted at 16. I knew I wanted to be an engineer from the age of 10… I was good at maths, good at physics and I knew that combining those makes engineering. “

Emily won a place at the University of Southampton and is now in her final year of a four-year MEng degree in Aeronautics and Astronautics with Spacecraft Engineering.

Her final degree project, which she is undertaking with five fellow students, is to design a hypervelocity impact facility, using a two-stage light gas gun to accelerate a small projectile to Low Earth Orbit (LEO) velocities.

If the university were to build this hypervelocity impact facility, researchers could model the damage caused to orbiting satellites by an impact with one of the countless tiny pieces of space debris that circle our planet. As Emily explained, they could be "as small as flakes of paint."

The idea is to hit a target, such as an experimental protective material for a satellite, with a projectile travelling at 6.5 km per second, or about 14,540 mph. With the target fixed in a vacuum chamber, simulating LEO conditions, investigators could study the debris pattern if a small satellite such as a CubeSat (wiki) were hit and destroyed by even a minuscule piece of orbiting space junk.

As well as using her scientific expertise on the project, Emily has developed other skills that will stand her in good stead for her future career.

“I’ve had to demonstrate decision making skills, weighing up options through my calculations. I have taught myself coding, with Python. It has also helped with my team skills because, due to Covid, this is the first big team project most of us have been involved with.”

She is clear why science was the path she intended to take.

“There is a lack of girls and women in science and that was one of the reasons I decided to focus on [science] rather than say English or art. I wanted to prove the stereotype wrong because obviously girls are very good at science. I have spent quite a lot of time in fields that are male dominated, but that never deterred me. In Cadets, there were five girls in the squadron of about 35. But there were quite a lot of female staff involved, and I owe them a lot because all my confidence and leadership qualities developed in Air Cadets. I have learned to be confident and speak up. At school, you tend to get praised for being quiet, especially girls. But that doesn’t help when you DO need to speak up. Most boys didn’t have a problem with that though.”

As someone who was always sure of her career path, Emily recommends science to girls.

“A good grounding in Physics and Maths is really important, especially at A-Level, and at university it gives you so many options. I had a lot of exposure to the RAF from a young age. Living on Anglesey, we were pretty close to RAF Valley. I had a lot of friends at primary school who were RAF kids, so we used to go to the base a lot.”

She is due to start officer training later this year at RAF Cranwell. She hopes to become an Aerosystems Engineering Officer, and, eventually, to work on fast jets.

Officer Cadet Imogen Thompson comes from the North of England and went to Welbeck Defence Sixth Form College, taking A-Levels in Maths, Further Maths and Physics, with AS Level Computer Science. She is now studying for a BSc in Computer Science at the University of Southampton.

Following her graduation, Imogen will attend the Britannia Royal Naval College, in Dartmouth, for initial officer training in the Royal Navy.

“I’ve always been interested in science and my skills lined up with STEM more than other subjects."

Imogen’s secondary school helped by giving students interested in engineering the opportunity to meet people who work in those subject areas.

“That helped a lot because I could see a future in engineering."

In her final year university project, she is analysing safety and security requirements for remotely operated underwater vehicles (ROVs). ROVs are increasingly used in low-accessibility underwater environments by industry, academia and the military. Fundamental design flaws in safety and security of design can cause significant, dangerous, and expensive vulnerabilities.

“I am looking at a small subset of an ROV system. The aim is to come up with robust requirements that can be part of the design considerations in future projects."

She hopes that analysis of such vulnerabilities will aid her in her future career.

Imogen pointed out that in the sixth form and at university, the science subjects have been male dominated.

“It’s not unusual for there to be just one or two girls in lessons and seminars. In general, everyone accepts the value I bring as part of a diverse team of competent equals. However, I think the issue of social acceptance of women in STEM goes further than surface-level acceptance. Implicit bias does play a role in the treatment of women in STEM, even if the people involved do not have mal-intent. There is further to go with gender diversity than outward acceptance as equals. There should be more diversity in STEM subjects because if everyone has the same background nothing will change and you won’t get the important breadth of ideas in projects.”

Her interest in a military career started at an early age, including joining the Combined Cadet Force Royal Navy Section while at school.

The MOD has an ongoing commitment to sponsoring STEM Undergraduates in the future through the launch of the Defence STEM Undergraduate Sponsorship (DSUS) Scheme, in September 2022. The scheme will continue to support young people as they prepare for STEM careers in the UK armed forces or Civil Service. The overall scheme management will remain with the Defence College for Military Capability Integration (DCMCI) at the Defence Academy.

DSUS will provide the flexibility needed to ensure that the MOD is able to attract the next generation of talented and skilled young people, capable of addressing the challenges of the fast pace of change in military capabilities, technology and information warfare.